Bills to Help the Filipino Community 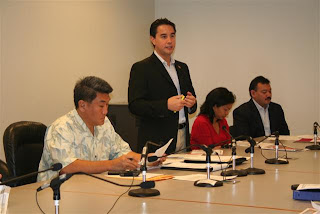 The Filipino Caucus, chaired by Rep. Michael Magaoay, today announced the passage of several bills and resolutions of importance to the Filipino community.

On May 25, Act 100 was signed into law. The measure requires the Office of Veterans' Services, at the request of a survivor or interested party of a deceased World War II Filipino veteran, to make payment directly to a mortuary or crematory for funeral and burial services, and to transport the veteran's remains to the Philippines.

Other measures help caregivers by exempting recipients of social service payments from the scope of employment related laws, establish the Pineapple Workers and Retirees Housing Assistance Fund for displaced Del Monte workers, call for a state-province relationship between the State of Hawaii and the province of Cagayan, and ask the US government to repay Filipino WWII veterans by enacting Filipino family reunification, or similar legislation, granting priority issuance of visas to Filipino veterans' children with approved immigration petitions.

There are 7,000 total Filipino veterans in the United States, 2,000 of whom reside in Hawaii.

Photo: Members of the caucus met with leaders in the Filipino community in March to gather feedback and discuss topics such as veterans' benefits, diabetes and other health issues, and language interpretation services. From L: Reps Magaoay, Manahan, Finnegan, Mizuno.
Posted by James Gonser at 10:40 AM