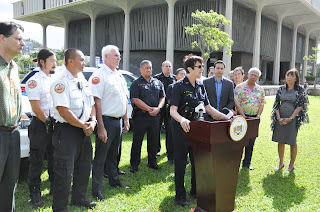 Measures could have prevented the murders of two police offices in January
Honolulu, Hawaiʻi – Police, first responders and State lawmakers gathered on the grounds of the State Capitol today to urge the House and Senate to pass four critical gun violence prevention bills being voted on in both chambers tomorrow.


Police Chief Susan Ballard said these bills have the full support of HPD .
"Please pass these bills for the safety of our officers and the community," Ballard said. "I can show you two good reasons to do that, the black band on our badges represent our two officers that were killed. Passing these bills is the right thing to do."
Officers Tiffany Enriquez and Kaulike Kalama were fatally shot while responding to the scene of a reported stabbing near Diamond Head January 22 by a man with mental illness using guns that had belonged to an individual who had died. That tragedy has heightened the urgency with which lawmakers are considering measures dealing with gun violence and mental health.

Jim Howe, Director of the Honolulu Emergency Services Department said paramedics, life guards, and Emergency Medical Technicians regularly put their lives at risk in performing their duties and these bills would help to reduce that risk.
"They are the ones on the scene that go with police into homes trying to save lives," Howe said. "Even though there is a risk, they still provide a high level of service. Life guards are often harassed on beaches or if they have to call police for support. To insure their safety and the safety of the community, please pass these bills."
Representative Chris Lee, Chair of the House Judiciary Committee, said these measures have been drafted with the help of law enforcement, mental health agencies, and the Attorney General.
"We can uphold the second amendment for law-abiding citizens while taking commonsense steps to keep guns out of the hands of criminals and the mentally ill," Lee said. "HB2744 will create a gun violence commission to share gun violence information and close loopholes around unregistered guns assembled from component parts."
HB 2744         Relating to Gun Violence Prevention
Establishes the gun violence and violent crimes commission. Requires reports to the Legislature. Makes it a class C felony to purchase, manufacture, or otherwise obtain firearm parts for the purpose of assembling a firearm having no serial number. Amends certain requirements relating to firearms registration.

Representative Lee said this measure establishes a gun violence and violent crimes commission to bring all law enforcement and mental health agencies and experts together to share data, resources, and better protect our community. It also prohibits people from building their own guns from 3d printed parts or by ordering components online from illegal sources without serial numbers and without registering those firearms with law enforcement. Two homicides in Hawaiʻi have already been committed using unregistered guns assembled from component parts and this loophole needs to be closed.
Representative Gregg Takayama, Chair of the House Public Safety, Veterans & Military Affairs Committee talked about HB 1902 HD2.
"Many mass shooters use large capacity magazines. When they have to stop and reload, that is when they can be stopped," said Takayama. "This bill makes it the same requirements for rifles as for handguns. No one expects a mass shooting in their community and we are taking these steps now to make sure it doesn't happen here."
HB 1902 HD2  Relating to firearms
Extends the prohibition for large capacity magazines to all firearms, rather than just pistols. Provides an exception to the prohibition for law enforcement agencies and duly authorized officers. Prohibits certain individuals from owning firearms who: (1) as a minor, were diagnosed with behavioral, emotional, or mental disorders, unless the person has been medically documented to be no longer either adversely affected by the behavioral, emotional, or mental disorder or deemed a danger to themselves or others; or (2) were adjudicated by the family court to have committed a certain number of crimes of violence. Requires records of these diagnoses or adjudications to be made available to law enforcement officials. (HD1)

Representative Takayama said 10 of the worst mass shootings in the United States in the past decade involved the use of large-capacity magazines.  Honolulu Police requested a 10-round limit on magazines because the best opportunity to intervene in a mass shooting is when the shooter has to reload. Currently Hawaiʻi restricts handguns to 10-round magazines; this bill would extend the same limit to rifles, which currently have no limit on magazine capacities. Eight other states have enacted such a law.
Senator Karl Rhoads, Chair of the Senate Judiciary Committee, said HB 2709 deals with a loophole in current law that allows guns to fall into the wrong hands after their owner has died.
HB 2709   Relating to the Uniform Probate Code
Requires a personal representative of a decedent appointed under the Uniform Probate Code to notify the police department of the appropriate county of any and all firearms in an estate.  Requires the police department to certify that all firearms in an estate are properly transferred or disposed of before the estate may close.
Senator Rhoads said this measure ensures that when a person dies, their guns are properly transferred to a new legal owner, or are sold through proper channels to ensure they don’t fall into the wrong hands. Firearms are sometimes left by the deceased without accountability, and this would ensure they don’t end up on the black market or are discovered and used illegally by those without proper training.
"The NRA will say that gun violence prevention laws mean that only criminals will have guns. That argument could be made for any law and it is just not true," said Senator Rhoads. "Hawaiʻi has among the strongest gun laws and lowest rates of gun violence in the country, but loopholes continue to allow guns and ammunition to fall into the wrong hands. We already have more than one gun per person in Hawaiʻi. We need to keep those guns out of the hands of criminals. These bills make a lot of sense."
Representative Joy San Buenaventura, Chair of the House Human Services and Homelessness Committee, said HB2736 HD2 will help keep guns out of the hands of people who are mentally ill.
"The tragic incident involving the deaths of two Honolulu Police Officers in January has highlighted the need to improve mental health care and ensure we prevent guns from getting into the hands of those suffering from mental illness," Representative San Buenaventura said.
HB2736 HD1 Ammunition; Purchase; License to Sell. Requires the licensing of sellers of ammunition, and for the identification and proper permitting of purchasers or possessors of ammunition. Regulates ammunition in the same manner that firearms are regulated.

Representative San Buenaventura said currently anyone who acquires an illegal gun off the black market or gets access to guns that are not their own can walk into a gun store and purchase ammunition to fire them without a background check or accountability. This measure requires proof of gun registration to be showed before a person can purchase ammunition. This will allow law-abiding gun owners easy access to ammunition, but prevent criminals, the mentally ill, and others who should not have guns from acquiring ammunition even if they have acquired an illegal gun, such as the suspect had in the case of the Diamondhead shooting.
"When you put a gun into the hands of a person that is mentally ill, you've got an explosion waiting to happen," Chief Ballard said.
Read more at:
Honolulu police troubled by big spike in crimes involving firearms Hawaii News Now
Honolulu Police Chief Offers Plans to Curb Violence Officer.com
Hawaii eyes closing gun loopholes, bolstering mental health AP
Editorial: Close loopholes in isles’ gun laws Star Advertsier
Posted by James Gonser at 4:27 PM