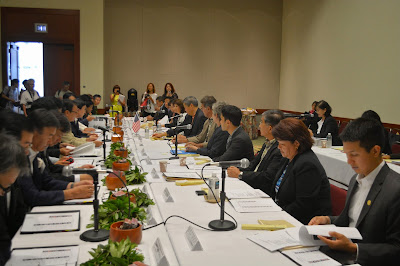 Hawaii State Legislators and members of the Japanese House of Councillors met yesterday to hold the second international meeting of the Japan-Hawaii Legislators’ Friendship Association (JHLFA) at the Hawaii Convention Center. The parties engaged in discussions on a wide range of common topics important to Hawaii and Japan focusing on political, economic, and business matters.

The association was formed to hold legislative-level dialogue to strengthen relationships between Japan and Hawaii.

The meetings commenced with private discussions between the parties on the political climate of Japanese and Hawaii relationships, followed by business and economic presentations on topics of mutual interest such as the facilitation and growth of tourism to Hawaii, the proliferation of renewable energies, and the international development of young emerging leaders in Hawaii and Japan.

The day’s sessions also included an awards ceremony to recognize individuals and organizations that have contributed to the development of economic and cultural ties between Hawaii and Japan. The honorees were:

“Hawaii has lost a dedicated and passionate public servant who championed protecting consumer rights during his 18 years in the State House of Representatives. Bob worked tirelessly to pass legislation that strengthened the rights of residents in mortgage foreclosures. He was an early and strong advocate of natural disaster preparedness and was one of the first to call attention to the health effects of vog. He was a good legislator, highly respected by his colleagues and a great friend. I will miss him.

On behalf of the House of Representatives I would like to offer our condolences to his wife Jo-Anna and his sons Bobby, Kenny and Doug.”