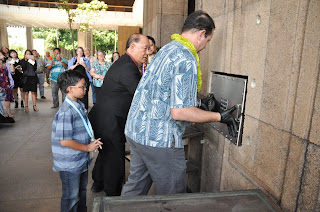 Contents to be reveled in 2069 during 100th anniversary commemoration ceremony
Honolulu, Hawaiʻi – When the Hawaiʻi State Capitol was dedicated on March 15, 1969, a time capsule was placed in a concrete wall and sealed with a bronze plaque. As part of the 50th Anniversary celebration of the Capitol building this past March, that time capsule was opened and the contents reveled.


Today, a new time capsule with mementoes of our own era was placed in the northwest corner column of the Capitol rotunda and the original dedication plaque reinstalled.
"This is living history. The objects we have sealed in this wall today will be removed someday and provide insight into our lives in the early 21st Century," said Senator Brian T. Taniguchi, chairman of the 50th Anniversary of the Hawaiʻi State Capitol Task Force. "Time does not stand still, but by placing this time capsule, a moment in time has been captured."
On March 15, 2019, the original time capsule was removed and opened. The 20-pound copper box inside the wall held many historic items including photos of Gov. John Burns and his cabinet, the first Hawaiʻi state constitution and photos from all eight islands. It was a time of transition when Hawaiʻi had been a state for only 10 years.

Contents of the second time capsule are a secret, but the public was asked to offer their suggestions of things that would represent the Hawaiʻi of today, and that would fit inside the 18 inch by 17 inch by 8 inch box.
A sealed and unread letter from President Barack Obama was also placed inside the capsule by Sen. Taniguchi's grandson Roycen Strom.
"It is important to remember where we come from and the experiences of those that were here before us," said task force member Representative Kyle T. Yamashita. "Just as the first time capsule allowed us to touch and see items our predecessors thought were important, our grandchildren will be able to look into the past through the items we have included in this time capsule today."
Posted by James Gonser at 12:51 PM