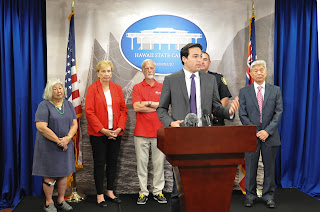 Rep. Chris Lee says the goal is to keep drunks off the road, save innocent lives
Honolulu, Hawaiʻi – In an effort to end the crisis of drunk drivers killing innocent people, a law passed by the Legislature this session placing tough penalties on DUI offenders is starting to take effect.


"Last year 33 people were killed by drunk drivers in Hawai’i and each death was the result of a choice by a driver knowingly getting behind the wheel drunk. We will tolerate this reckless behavior no more," said Representative Chris Lee (Kailua, Waimānalo), who introduced the bill. "Our new law substantially increases fines, adds years of automatic license revocation, and helps send repeat drunk drivers to prison for up to five years to keep our roads safe."
Since the bill was signed into law this month, at least four repeat DUI offenders have been arrested and face long prison sentences and other penalties under the new law.
Captain Benjamin Moszkowicz, Honolulu Police Department Traffic Division, said on average four to six habitual drunk drivers are arrested each month and this new law makes a third DUI arrest a felony rather than a misdemeanor.
"It is important now that we make sure the public is aware of the penalties, so we can save lives and end the constant fatalities caused by people making bad choices and getting behind the wheel drunk," Moszkowicz said. "Hopefully, this will help prevent some of the habitual folks from reoffending in the future."

The new law increases fines, lengths of license revocation for first time offenders, and specifies that a habitual operator of a vehicle under the influence of an intoxicant convicted two or more times can be sentenced to a five-year prison term or probation of five years, along with a mandatory revocation of license for three to five years, and a fine of between $2,000 to $5,000. In addition, any vehicle owned and operated by the person committing the crime may be subject to forfeiture.
"This bill shows that the legislature, HPD and the prosecutors' office are working together to make the streets of Honolulu a safer place," said Dwight Nadamoto, Acting Prosecuting Attorney. "Hopefully with the news going out of increased punishments, people will learn not to drive drunk."
The bill also established a task force to determine which further changes in our DUI laws are needed to help keep drunk drivers off the road.
Arkie Koehl, Public Policy Chair of the group Mothers Against Drunk Driving (MADD), said Hawaiʻi has had very lenient DUI laws for years.
"We are looking for the task force to develop a comprehensive overhaul of the DUI laws as they stand now. There is a number of things that need to be changed," he said.
Posted by James Gonser at 2:37 PM