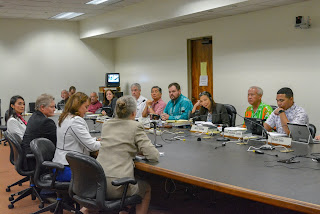 The House Public Safety, Veterans, & Military Affairs Committee in a joint hearing with three other House committees today amended and passed HB 1180 that provides $60 million in disaster relief for Hawaiʻi Island following the destruction caused last year by the Kilauea eruption.
Of the $60 million total, $20 million would be set aside in a state grant and $40 million would be designated for a state loan with an expected payback from the federal government. Spending the funds would be subject to the Hawaiʻi County Council approval. The state has already provided $22 million in emergency funds for Big Island disaster relief, bringing the total package to $82 million.
The bill has the support of the House, Senate lawmakers and leadership, the Hawaiʻi County Council, and the Ige Administration and now moves to the House Finance Committee where Chair Sylvia J. Luke has said she would expedite it.

Representative Joy A. San Buenaventura (Puna) said thousands of acres were inundated by lava, covering neighborhoods, farms, a school, cultural sites, roadways, and other infrastructure.
"People on the Big Island are devastated. Their lives have been thrown into chaos," said Rep. San Buenaventura. "The county cannot afford to remedy this destruction on its own and needs this state support."
The eruption began on May 3 and eventually destroyed 716 homes and covered nearly 14 square miles in the Puna area of Hawaiʻi Island.
Sen. Russell E. Ruderman (Puna, Ka‘u) thanked the Big Island lawmakers in both the House and Senate for their hard work securing this relief for the people affected by the lava destruction.
"I'm hopeful about this bill, as well as the Senate companion bill, and grateful for the efforts of both Chambers of the Legislature on behalf of the residents of Puna," Ruderman said. "The Kilauea lava flow inflicted devastating damage, wiping out the homes and livelihoods of hundreds of residents, including many of my friends and neighbors. These measures will provide for much needed relief and recovery."
Gov. David Ige said lawmakers have visited the disaster sites many times and understand the needs of the people trying to rebuild their lives.
"I want to commend the Legislature for their quick action in response to the needs of the Puna community and Hawaiʻi Island.," Ige said. "Recovery on Hawaiʻi will be a long-term venture and this measure will provide much, much needed relief."
Hawaiʻi County Council member Ashley L. Kierkiewicz said Big Island residents have "oceans of gratitude" for the support they have been given today.
"Rep. San Buenaventura really helped to usher in this bill and we are very grateful to House and Senate leadership and the money committees for really seeing that this was important," Kierkiewicz said. "Not just to Big Island or the Puna community, but for everyone in Hawaiʻi. We are all in this together. We were embraced as part of the family."
Other committees voting to approve the bill today include the House Committees on Water, Land, & Hawaiian Affairs; Human Services & Homelessness; and Housing.