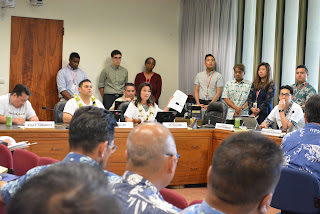 Honolulu, Hawaiʻi – The House Finance Committee today passed HB 2 HD1, the state operating budget for fiscal years 2019-2020 and 2020-2021, as the first step toward adding additional accountability and transparency to the way the state spends money.

The ultimate goal of performance-based budgeting is to have every state agency justify discretionary funds they receive for each two-year budget cycle. Eventually, zero-based budgeting will analyze the entire budget of programs.
"The idea is to have public policy drive the budget rather than have the budget drive public policy as has often been done," said Representative Sylvia Luke, Chair of the Finance Committee. "This change will likely take a couple years to completely implement, but it will make our departments accountable for the funds they receive, and the public will better know how their taxes are being spent."

The base budget also includes previously appropriated collective bargaining amounts, amounts necessary to fulfill Employees' Retirement System, Employer-Union Trust Fund, debt service and Medicaid requirements.
The base budget totals will be finalized before the bill is presented to and voted on by the full House next week, and the final budget numbers will change as department requests are considered.
The budget bill has been amended by removing certain programs and appropriations for further evaluation by their respective subject matter committees.
For example, budget requests from the State Department of Health may be heard before the House Health Committee. This allows the subject committees to closely review each budget request, question directors and staff about program objectives, and examine whether programs are achieving desired outcome for constituents. Committee hearing discussions will also provide a more open public discussion of state spending.
"We are striving for greater transparency of how we spend taxpayer money," Luke said. "We also want the departments to know that just because a program was previously funded it won't necessarily be funded again. Each budget request must demonstrate that it is beneficial before being approved."
Hawaii was the first state in the country to adopt a performance-based budgeting system in 1966, but implementation has faced numerous obstacles over the years.
In his Opening Day speech, House Speaker Scott K. Saiki said initiating zero-based budgeting will allow the Legislature to regain its role as the fiscal watchdog of state money.
"The Hawaiʻi Constitution gives the Legislature the authority to approve the state budget, appropriate public funds, and to enact laws. (We) need to reassert the Legislature's policymaking role," Saiki said.
Posted by James Gonser at 2:48 PM