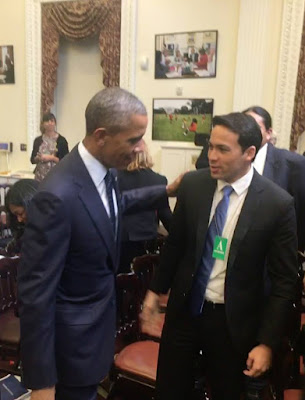 Rep. Chris Lee (Kailua, Waimanalo) was among 50 Democratic state lawmakers from around the country to meet with President Barack Obama today at the White House. The President urged the lawmakers to adopt his domestic economic agenda at the state level because he doesn’t expect Congress to take much action for the remainder of his presidency.

The discussion focused on the need by the states to tackle the issues of raising the minimum wage, ensuring paid sick leave for workers, family leave, pay equity and enhancing college affordability.

After the meeting with the President, Rep. Lee joined seven other state lawmakers including Assemblyman Michael Blake of New York and Rep. Pricey Harrison of North Carolina in a press conference to talk about the meeting and the issues discussed.

During the media availability Rep. Lee said, "Issues like paid family leave and medical leave aren't red or blue issues. They will benefit everyone and are overwhelmingly supported by people around the country, but Congress has been unable to take action.

Families in our community are hurting. I have friends just starting families who are being forced to choose between caring for their newborns or keeping their jobs. That isn't right. The United States is the last developed nation in the world without meaningful paid family leave. If Congress won't act to fix that, then it's up to us at the state level,” Lee said.