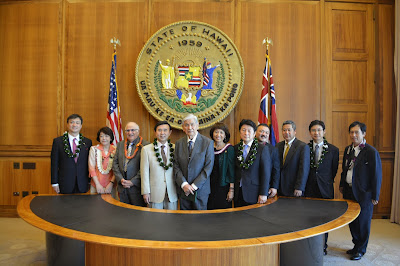 The Hawaii State Legislature has announced the establishment of the “Japan-Hawaii Legislators Friendship Association” with members of the Liberal Democratic Party (LDP) House of Councillors in Japan. The association was formed to build and strengthen relationships between Japan and Hawaii through discussions on a wide range of topics including economic, environmental and educational issues.

The House of Councillors is the upper house of the Japanese National Diet, equivalent to the United States Senate.

The members of the Liberal Democratic Party, House of Councillors delegation include:
Posted by Unknown at 9:44 AM