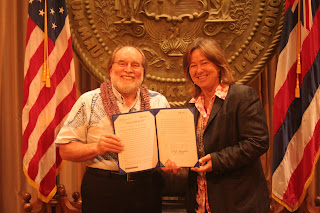 It's not every day that a piece of legislation has deep personal significance to lawmakers, benefits the people of Hawaii, and provides a service the state needs. Senate Bill 2110, which established 'Ulu'ulu: The Henry Ku'ualoha Giugni Moving Image Archive of Hawai'i, does all of the above. Governor Neil Abercrombie signed the bill into law this afternoon. 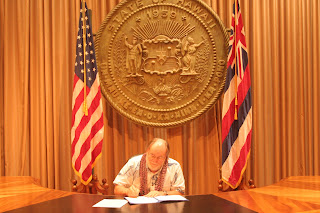 Funded by the United States Department of Education through a congressionally-directed grant, the archive is dedicated to the care of film, videotape, and audiovisual materials, as well as the preservation of Hawaii’s rich moving image tradition.

The ‘Ulu‘ulu: The Henry Ku‘ualoha Giugni Moving Image Archive of Hawai‘i will be located at the University of Hawaii, West Oahu, and will include an online archive of recently preserved and digitized materials as well as an English and Hawaiian language website. 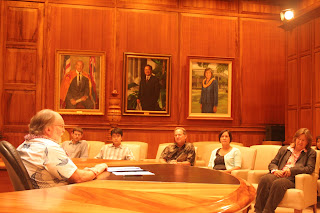 The signing of the bill was an intimate affair involving Henry Giugni's daughter, Rep. Heather Giugni, and old friend, Governor Neil Abercrombie. The legislation is not only significant for the Giugni family, it also means a great deal to the State of Hawaii and to the film industry, where Rep. Giugni has spent most of her professional life.

Prior to signing SB2110 into law, the Governor reflected on the lasting impact Henry Giugni has had on the state as well as the necessity of establishing an archive to preserve Hawaii's film and audiovisual treasures for future generations. Dedicating the state moving image archive to Henry Ku'ualoha Giugni is a fitting memorial to a man and to a family that has given so much to the State of Hawaii.