A New Day and a Debt Paid 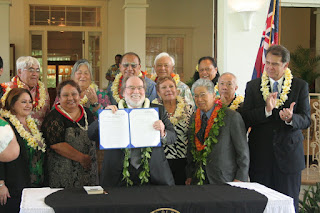 Today lawmakers joined Governor Neil Abercrombie, Senator Daniel Akaka, the Office of Hawaiian Affairs (OHA) trustees, and other state leaders for a bill signing ceremony enacting into law SB 2783, Relating to the Public Trust Lands, which resolves a long-standing dispute between the state and OHA over ceded-lands.

The law conveys certain parcels of Kakaako Makai lands from the state to the Office of Hawaiian Affairs. The conveyance of these properties fulfills the constitutional obligation to native Hawaiians and resolves all disputes and controversies relating to the portion of income and proceeds from the public land trust lands owed to OHA for the period between November 7, 1978 and June 30, 2012.

"Settling this longstanding issue was a top priority for me and for my Administration. This agreement that is now law, took a lot of hard work and collaboration. I appreciate all those who took the time to make this right, including the Legislature for making sure that all sides were heard." -- Gov. Neil Abercrombie (KITV)

"The Board of Trustees is grateful to the Governor for his leadership in making this settlement a reality. We would also like to thank the Legislature for making this a priority and the Native Hawaiian Community and its leaders for their support of the bill." -- OHA Board of Trustees Chairwoman Colette Machado(KITV)

"The Kakaako community also deserves a lot of credit for its stewardship over this area. We are committed to making sure the land is used in a responsible way that will benefit the entire community. We will balance cultural and environmental considerations with the need to support programs that benefit the Native Hawaiian community." -- OHA Board of Trustees Chairwoman Colette Machado(KITV)