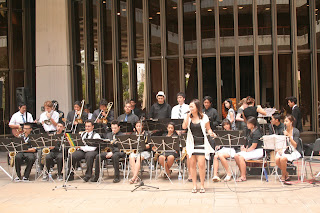 Hailing from the Big Island's Hamakua Coast, the Honoka‘a Jazz Band is in the middle of its Big City Tour of Oahu. The tour, which coincides with National Jazz Appreciation Month, made a stop at the Capitol this morning. As a special surprise, jazz aficionado, Governor Neil Abercrombie issued a proclamation declaring April 20th, 2012 as Honoka‘a Jazz Band Day!

Gary Washburn, school music director, created the Honoka‘a Jazz Band in 1988 and changes the musical repertoire annually to reflect the evolving personality of the band as students graduate. The band has earned distinction as one of the preeminent school musical programs in the nation. In 2010, Honoka‘a's music program beat out more than 22,000 other schools to be awarded one of the top 138 music programs in the United States. Last year, the band received the coveted Grammy Signature Schools Enterprise Award and Gary Washburn received the National Society of High School Scholars' Claes Nobel Educator of Distinction Award. This year, the band performed at the Ilikai Hotel in Honolulu for the Edison Learning Convention and will be featured in the June edition of Hana Hou Magazine.


“With all of the emphasis on math and science, it is crucial to always remember that it is music and the arts that provide us with inspiration,” said Rep. Nakashima, (District 1 - North Kohala, South Kohala, Hamakua, North Hilo, South Hilo).
“Music, drama and the arts provide our students with the opportunity to exercise their creativity, act on their inspiration, and imagine the possibilities,” he added. “Teachers like Mr. Washburn provide students with the venue to explore this realm and to contribute profoundly to our quality of life.”


The remaining stops on the Honoka‘a Jazz Band's Big City Tour are listed below.