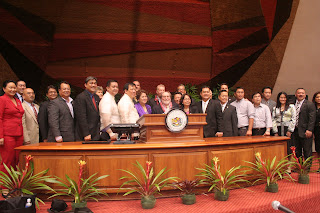 The League of Cities of the Philippines (LCP) is a nationally recognized organization representing 40 million people living in 122 cities in the Philippines. A delegation from the LCP came to Hawai'i to sign a Memorandum of Understanding and Cooperation with the State of Hawai'i. This was the first agreement between an American state and group of cities from another nation and, with 12 mayors and one vice-mayor making the journey, the largest trip of its kind in the history of the Philippines. 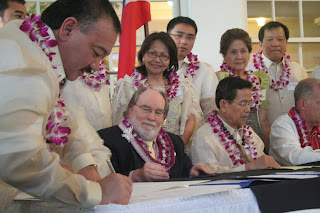 Rep. John Mizuno (Kamehemeha Heights, Kalihi Valley, Fort Shafter) took the lead in welcoming the delegation. While they were here, the LCP representatives were welcomed with "Aloha Night" at the Philippine consulate, participated in a Disaster Preparedness/Risk Management Forum, toured the Civil Defense Center, toured the State Foundation on Culture and the Arts, participated in a Tourism Forum, participated in a forum on Human Services and Juvenile Justice, toured Pearl Harbor and laid a wreath at the Arizona Memorial, were honored with a floor presentation by the House, and attended a reception at Washington Place for the signing of the Memorandum. 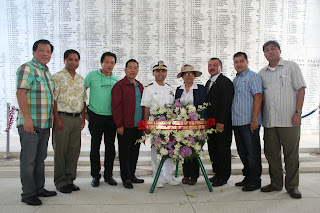 “Forming a union with the League of Cities of the Philippines not only strengthens the bond between our Filipino-Hawaiian community and their country of origin, it connects the state with a valuable partner in the Pacific,” added Rep. Mizuno. “This trip marks the dawn of an era of increased economic, cultural, and social exchange between the state of Hawai’i and the Philippines.”
Posted by Jay at 4:30 PM

Why aren't there Filipino-American representatives welcoming this delegation?

With all the cutbacks, threats from state gov, poor business support, top heavy gov, state, local and union...forget sending our tax $ to help everybody, forget the Washington house party, did voters have a say in this signing project? How much did it actually cost us? Another waste of money in a bad economy run by over pompous people who are "out of touch"!!