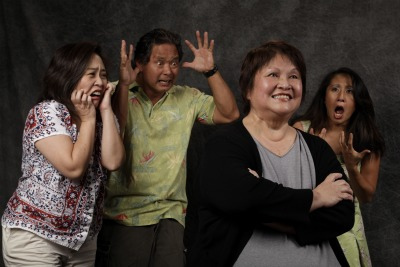 Pictured from (left to right): Jodie Yamada (Elaine), Marcus Oshiro (Dean), Valerie Falle (Kimi Morimoto), and Nani Morita (Flo) in the production of "It's All Relative." Photo courtesy of Kumu Kahua Theatre.
Our very own Rep. Marcus Oshiro, the State House Finance Chairman, has a part in a new dark comedy by playwright Edward Sakamoto that opened on May 26, 2011 at Kumu Kahua Theatre. It got great reviews this past weekend, so plan to check it out before it closes at the end of June.

The play, “It’s All Relative,” follows a seemingly happy local Japanese-American family as they deal with lingering issues in modern Hawaii. Hidden behind what appears to be a stable and happy family lay a web of snarled relationships between family members, starting first with the collapse of a 50-year marriage. Rep. Oshiro plays the failed couple’s son, Dean Miyamoto, a frustrated high school teacher going through a midlife crisis. The multi-generational family is rounded off with Miyamoto’s wife Elaine, his unmarried sister Flo and his three Yonsei granddaughters.

Check out the review of the play from John Berger in the Honolulu Pulse as well as Noe Tanigawa’s backstage interview on Hawaii Public Radio.