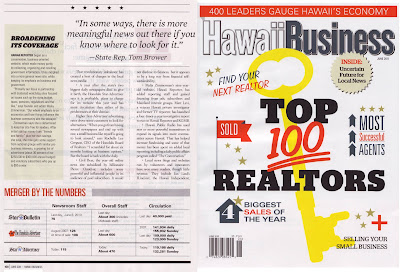 Yesterday, the Honolulu Star-Advertiser announced that they will be putting up a paywall on their website for certain parts of their online coverage. They did not provide details on what specifically would be behind the paywall or how much they are planning to charge.
Hawaii Business Magazine also covered the subject of "paying for news" in their June edition. It's a comprehensive overview of the Honolulu newscene from the perspective of news providers, news readers, and news makers. Rep. Tom Brower is in it and said:
“In some ways, there is more meaningful news out there if you know where to look for it,” says Brower, who reads the Star-Advertiser every day, channel surfs TV news and drops in on several websites.

“There are stories you won’t get on mainstream television and certainly not on commercial radio,” Brower says. “So I wouldn’t say it is all doom and gloom. It’s out there if you look for it.”

Brower worked in broadcasting for about 10 years during and after college, including local radio stations KSSK and KPOI. He started in radio at KGU on Seaside Avenue in Waikiki.

I agree with Rep. Brower.

As I posted on the Hawaii Business site:

As someone who has published http://www.allhawaiinews.com, curating the state's news every weekday for more than 2 1/2 years, I would have to say that there is more hard news out there, not less, especially state-level news.

I attribute that to Civil Beat and the evolution of Hawaii Reporter into a more solid news source. TV news sites remain a disappointment, primarily following the "if it bleeds, it leads," mantra.

It should get interesting once more paywalls are erected.