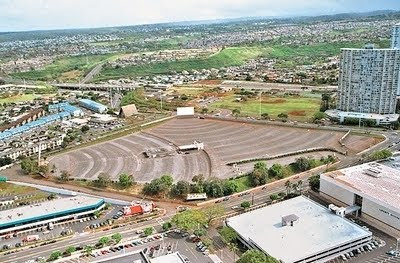 The Aiea Neighborhood Board will hold a meeting tonight, Monday, May 10, 7:30 p.m. at Pearl Ridge Elementary School to address a proposal by Robertson Properties Group (Los Angeles based) to redevelop the former Kam Drive-In site. The preliminary plans for the site include three, thirty-story, towers with an estimated 1000 residential units, as well as 150,000 square feet of retail space.

The community is urged to attend Monday night's meeting to hear additional details of the planned redevelopment and to have an opportunity to voice related concerns and questions. Residents living along Ka'onohi Street and Kamehameha Highway have previously raised questions about what this project will mean for the already congested traffic near the 14-acre site.

Representative Blake Oshiro, who drew attention to the proposed development back in February (http://the.honoluluadvertiser.com/article/2010/Feb/12/bz/hawaii2120352.html), notes that his office receives calls regularly from area residents concerned with the redevelopment project. Concerns have focused mainly on traffic congestion, possible retailers, and the eventual impact on swap meet vendors.

"Monday's meeting will provide a chance for the community to hear the Group's plans and ask important questions regarding the project's impact on existing roads, infrastructure, and other quality of life issues," said Oshiro. "An additional 1000 or more cars and people in this area would have a noticeable impact on the community, and we need to know the developer's plans for mitigating such impacts."

The development is touted as being an example of transit-oriented development (TOD) that will tie into the city's future mass transit project.

An agenda for the May 10th Aiea Neighborhood Board meeting can be found at the Neighborhood Commission website: http://www.honolulu.gov/nco/nb20/10/20mayag.htm
Posted by James Gonser at 2:35 PM