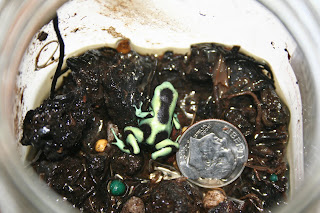 A staffer from the Legislative Reference Bureau yesterday brought to work a tiny, bright green and black frog he discovered over the weekend. No, it’s not a coqui. But apparently it could be toxic.

“He was deep in the soil of a 1-gallon pot whose plant I was repotting,” wrote Ted Baker, an attorney at LRB, in an email to the Hawaii Department of Agriculture.

Unsure of what to do with the aposematic creature, which is a tad bigger than a dime, Baker contacted the department to see whether he should release it back into its habitat or turn it over to the state.

The frog, a poison dart frog (Dendrobates auratus), is related to species found in South and Central America, whose dangerous and sometimes deadly toxins were used by indigenous people to create venomous arrows for hunting. The toxicity of the poison dart frog varies by species.

In the 1930’s, the poison dart frog was purposefully released into the upper Manoa Valley to assist in mosquito control by an entomologist employed by the Territory of Hawaii. Other than Manoa, these amphibians have been found in Waihole-Waikane, Oahu and Wailuke, Maui. The importation of poisonous dart frogs into Hawaii is restricted.

Keevin Minami, a land vertebrate specialist from the Plant Quarantine Branch of HDOA, told Baker in an email today that the frog could be released back into its habitat since it was established in Manoa, and that it may not be toxic, but he should still wear gloves and wash hands after touching it.

Poison dart frogs don’t synthesize their own poison. According to Minami’s email, the poison dart frogs need to feed on Red Imported Fire Ants, also known as RIFA or Blister Beetles, to produce toxins, and therefore, because Hawaii does not have these types of insects they may not be able to produce enough toxins to be extremely harmful. The poison would be more of an irritant.

So what is Baker going to do?

“I will take him home tonight and put him back where I found him, more or less…I don’t think I can bury him in good conscience, but I will find something comparable. I read that they live a long time and I don’t want it on my conscience that I inadvertently changed that!”
Posted by Thelma at 3:26 PM