The U.S. Justice Department today issued this memorandum to selected U.S. Attorneys in states authorizing the use of medical marijuana. Hawaii is one of those states. The Department makes clear that it considers marijuana a dangerous drug, and that the illegal sale and distribution of marijuana is a serious crime. It also recognizes that it has limited investigative and prosecutorial resources. Therefore, the memo states:

"As a general matter, pursuit of these priorities should not focus federal resources in your States on individuals whose actions are in clear and unambiguous compliance with existing state laws providing for the medical use of marijuana. For example, prosecution of individuals with cancer or other serious illnesses who use marijuana as part of a recommended treatment regimen consistent with applicable state law, or those caregivers in clear and unambiguous compliance with existing state law who provide such individuals with marijuana, is unlikely to be an efficient use of limited federal resources. On the other hand, prosecution of commercial enterprises that unlawfully market and sell marijuana for profit continues to be an enforcement priority of the Department. To be sure, claims of compliance with state or local law may mask operations inconsistent with the terms, conditions, or purposes of those laws, and federal law enforcement should not be deterred by such assertions when otherwise pursuing the Department’s core enforcement priorities."

The DEA's position on Marijuana can be read in full here. The position is summarized in this opening statement:

"The campaign to legitimize what is called "medical" marijuana is based on two propositions: that science views marijuana as medicine, and that DEA targets sick and dying people using the drug. Neither proposition is true. Smoked marijuana has not withstood the rigors of science – it is not medicine and it is not safe. DEA targets criminals engaged in cultivation and trafficking, not the sick and dying. No state has legalized the trafficking of marijuana, including the twelve states that have decriminalized certain marijuana use."

While not exhaustive, the Justice Department lists the following examples of situations which may indicate illegal drug trafficking"

Here is the AP story on the new federal guidelines. 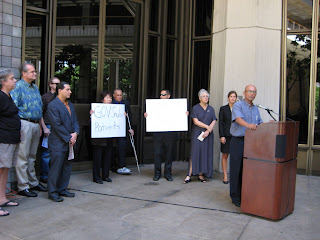 Last month, Governor Lingle announced that she would not go forward with a medical cannabis task force to review the issue. (The Legislature passed a bill to create the task force; the Governor vetoed the bill, the Legislature overrode the bill.) A private task force was formed in protest.
Posted by James Gonser at 10:05 AM

Email ThisBlogThis!Share to TwitterShare to FacebookShare to Pinterest
topics: Marijuana