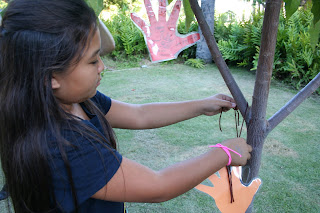 Have you seen the colorful hands doing the waltz with the wind on the kukui tree and a rainbow of pinwheels framing it the Capitol grounds yet? You can find this symbol of peace on Richards Street near the Korean War Veterans Memorial.

The Peace Day Hawaii Committee - comprising state government leaders, peace-education leaders and organizations, and Hawaii students - yesterday hung laminated paper cut-outs of the hands of Hawaii students. The students pondered the question "what does peace mean to you?" and wrote their responses on the hands. 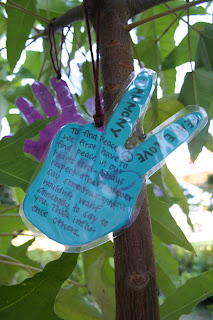 The event was planned to kick off Peace Day Hawaii 2009, which will be celebrated over the weekend and on Monday, September 21. Peace Day is the day of global ceasefire and nonviolence held each year on Sept. 21. All members of the United Nations agreed to stop fighting on that day. It is celebrated worldwide, but Hawaii became the first state in the nation in 2007 to officially recognize the occasion.
Posted by Thelma at 11:27 AM