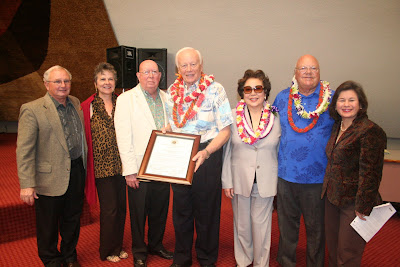 Left to Right: Rep. Denny Coffman, Rep. Cindy Evans, Rep. Robert Herkes, Peter Fithian, Roberta Fithian, Fred Duerr and Rep. Corinne Ching
The Hawaii International Billfish Tournament is underway this week, July 20-24, 2009, marking its 50th anniversary. You can follow the week's events on their website here. Rep. Robert Herkes (District 5 - Puna, Kau, South Kona and North Kona) has been involved with the tournament since the start, and organized a floor presentation earlier this year to recognize founder Peter Fithian, his wife Roberta and other key leaders in the organization such as Fred Duerr, former general manager of the legendary Kona Village. 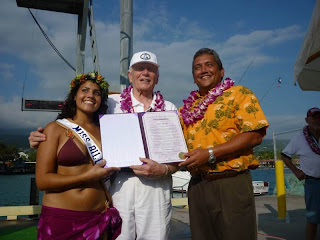 Today we are honoring the 50th Anniversary of the Hawaiian International Billfish Tournament.
I’m proud to say that I fished the first two years of the tournament, and I guess you could say I’ve been -- “hooked” -- ever since.

The HIBT was founded in July 1959, and it has long been considered one of the most prestigious billfish tournaments of its kind in the world. Because of this tournament, Kona is known to this day as one of the great fishing capitols, attracting anglers from all over the map. In fact, for this Golden Anniversary, the tournament organizers will expand its registration capacity to accommodate 50 teams, including those from Australia, Japan, Bermuda, Portugal, New Zealand, Papua New Guinea, South Africa, Tahiti, and, of course, the United States.

Yet, amazingly, it remains a tournament that is staffed by hard working and loyal volunteers, its popularity has always been driven by prestige, not money, and it runs on a lot of love and aloha spirit, starting at the top.

Mr. Speaker and members, we’re fortunate to have the people who are the heart and soul of the tournament here with us today, starting with the founder of the Hawaiian International Billfish Tournament – please welcome Mr. Peter Fithian.

I met Peter Fithian when he came to Hawaii to manage the Kona Inn. Not many know that before he came to Kona, he managed the Augusta National Golf Club. Now, if you’re a golfer, you know what a big deal that is. Peter knew that Kona needed to find an event that would attract more business to the town, and being the smart businessman that he is, he took the sports marketing concept of the Augusta Masters golf event and applied it to what Kona does best -- fishing.

Peter used to fish with some of the local fishermen in Kona, and he came to have a deep respect for their knowledge and experience on the best way to catch the giant blue marlins. He structured the tournament based on their expertise, including the best time of year, the best hours in the day, and the optimum number of days to hold the tournament.

As a result, the event became so successful that it attracted people from all over the world, not just to fish, but as spectators too. The HIBT became the model for other billfish tournaments, and it attracted royalty such as the Duke and Duchess of Manchester, and movie and TV stars such as Lee Marvin, Jonathan Winters, Arte Johnson, Toshiro Mifune, and the great Richard Boone.

Today, the Hawaiian International Billfish Tournament contributes millions of dollars to the local economy, and there is no question that it has “lured” many people from around the world to the Kona Coast over the past 50 years. Its contribution to Big Island business and tourism is immeasurable. And, through Peter’s guidance, the tournament has also encouraged more scientific research and the conservation of ocean resources in order to ensure that fishing along the Kona Coast remains healthy and abundant for all.

Mr. Speaker, I don’t know if you know that the Hawaiian International Billfish Tournament is the only fishing tournament in the world to have its own daily newspaper, “The Billfish Bowl – All the News that’s Fish, We Print.” I started working on this newspaper with the late Harry Lyons when it was called the “Ahi Daily News.” You can be sure that the 50th Anniversary of the Tournament will leap from The Billfish Bowl to become the big news throughout the state, even if it is a “fish story”.

Thank you, Peter, for all your hard work and your vision over the past 50 years.
Posted by James Gonser at 10:01 AM