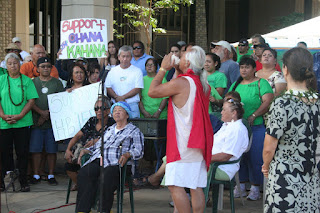 Governor Linda Lingle's deadline to veto bills is tomorrow, Wednesday, July 15, 2009. She has yet to veto a bill that would prevent the eviction of families living on state land in Kahana Valley. Dozens joined Rep. Jessica Wooley and Sen. Clayton Hee at the capitol on July 8, 2009 to rally in support of the passage of House Bill 1552.

Lingle has said that she could not sign the bill the way it's written because she says "no one could be evicted even if they're breaking the law." She added that if corrected she may sign it or let go without signature.

The following are comments from Rep. Wooley, the lawmaker who introduced the legislation:

"If the Governor signs this bill, I will work toward eliminating language that the Governor is concerned about during the next session. However, I think it's unnecessary because there is nothing in the current bill that would prevent any resident of Kahana Valley from being arrested and prosecuted if they break the law. In addition, the bill does not trump any federal law that allows the government to seize property.

If the Governor wants innocent families to be evicted and their homes bulldozed because someone, somewhere in the park, at some unknown time in the future might violate the law, I simply can't support that."

The residents living in those six houses were paid for their properties when they were condemned by the State in the 1960s. If the current residents are the same people, then they should be required to pay back the money with interest that they received. If they are not, then they have NO RIGHT TO BE THERE more than any other homeless beach squatter and should be evicted. They have refused even to pay the rents and do the work as they agreed for their temporary stay there. Who do they think they are to accept money for nothing? Who are they who think they can rip off the legitimate tax-paying citizens of this State? They have no righteous cause here as do the Hawaiians fighting for sovereignty. The Kahana resident issue is one of indolence and dishonesty. They are an embarrassment to the Hawaiian community.