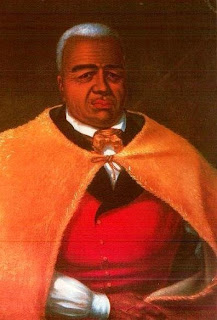 It was Kamehameha V, the great grandson of Kamehameha the Great, who proclaimed June 11 as a public holiday in 1871. It was one of the first holidays to be proclaimed as a state holiday by the Governor and the Legislature in 1959 after Hawaii became a state.
Kamehameha V, who was previously known as Lot Kapuiwa, was the last remaining monarch of the House of Kamehameha. He ruled from 1863 to 1872. As a bachelor, he had no direct descendants, and asked Princess Bernice Pauahi Bishop to succeed him as monarch upon his death. Pauahi refused.
The Hawaii Constitution provided that the Legislature hold an open election to name a new king. William Charles Lunalilo, Kamehameha V's cousin, won the election.
Posted by James Gonser at 3:57 PM