Yesterday was the last day for floor presentations to honor individuals and groups that have contributed to improving the social, educational, cultural and economic welfare of the State of Hawaii as well as those who have accomplished amazing feats.

I will be posting a series of photos and descriptions of a handful of the final floor presentations in the past month.

Let's start with two recipients who were acknowledged on March 30, 2009 for being exemplary role models; one of the honorees for his many years of dedication to education and the other for his hard work and commitment to healthy living. 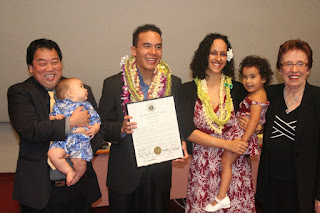 Rep. Marilyn Lee and other house members introduced offered House Resolution 295, which recognizes and commends Dallas Carter as an outstanding role model for good health. Dallas, a resident of Mililani, lost 130 pounds over three years through good nutrition and regular exercise. He recently won Beachbody.com's Million Dollar Body Game Giveaway and received $250,000. The father of two began his quest to get into shape after the birth of his daughter. He was unable to pick her up and knew then that he had to do something about his weight in order to take care of his family. 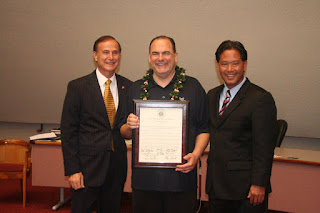