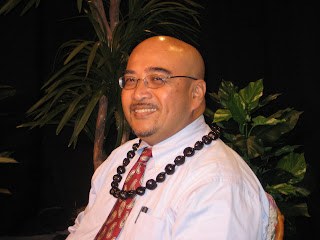 Rep. Gil Keith-Agaran is quick to clarify that he is "newly-selected" as opposed to newly-elected. Governor Lingle selected Rep. Keith-Agaran to fill the Maui seat of former Rep. Bob Nakasone who passed away late last year.

Rep. Marilyn Lee interviews Rep. Keith-Agaran for her series, "Kukui Connection", which will air on Sunday, April 12 and 26, 2009, Olelo, Channel 54.
No stranger to state government, Rep. Keith-Agaran has served as the Deputy and then Chairperson of the Department of Land and Natural Resources, Deputy at the Deparment of Commerce and Consumer Affairs, and briefly at the Department of Labor and Industrial Relations. Watch the show and find out more about his interesting path thus far:
*After attending public schools on Maui, how he was encouraged to apply to Yale and got accepted.
*What made him choose Berkeley for law school.
*His involvement and service in the Maui community.
*His experience on the Finance committee this session.
*His interest in technology, accessibility, information.
*Pursuing issues important to the community, particularly education and jobs.
*Working on issues that were important to Rep. Nakasone, particularly long-term care.
Posted by James Gonser at 10:10 AM