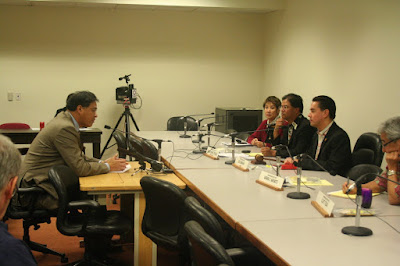 The House Committee on Tourism, Culture and International Affairs (TCI) today held an informational briefing with with the Hawaii Tourism Authority (HTA) to find out what happened with negotiations to secure Honolulu as host of the Pro Bowl in 2011 and 2012. The 10-member board recently rejected a second proposal by the NFL because exact dates that the games would be played were not specified. HTA made a counter proposal, which was rejected, assuring that the Pro Bowl would be played after the Super Bowl. The 2010 Pro Bowl game will be played in Miami's Dolphin Stadium one week before the Super Bowl.

Mayor Mufi Hannemann was the first to speak with lawmakers this morning, urging HTA to accept the offer that is on the table. He commented on the urgency of closing the deal with the NFL before the football game gets intercepted by another city. Mayors in U.S. cities, such as Dallas and Miami, are ecstatic that the Pro Bowl may leave Hawaii for good, he said.

Hannemann reminded lawmakers that the Pro Bowl is part of Hawaii's culture. Week-long Pro Bowl events not only benefit the tourism industry, but also increases morale in residents around the island. He also mentioned the fact that the NFL provides $100,000 to Hawaii charities each year. This year will be no different. The NFL has agreed to give Hawaii the money next year even though the game will not be played here.

Rep. Joey Manahan, chair of the House Tourism, Culture and International Affairs Committee, hopes that the board and the NFL will soon come to an agreement. We need to make sure that the Pro Bowl game comes back to Hawaii, he said, then we can work on making it better and keeping it here for another thirty years.
Posted by Thelma at 5:38 PM