Rep. Mele Carroll and the Legislative Hawaiian Caucus met with leaders and practitioners in the Native Hawaiian health community at a meeting on Jan. 15.
Caucus members heard concerns from members of Hui No Ke Ola Pono, a non-profit that provides community-based health care services on Maui; Papa Ola Lokahi, a clearinghouse for data and timely information associated with the health status of Native Hawaiians; Mental Health Alliance; and Community Health Centers in Rural Areas.

“It’s a rare occasion, quite frankly, that we have been invited to speak in front of legislators,” said David Peters of the Kaua‘i Community Health Center. “We at Papa Ola Lokahi look at new initiatives to integrate into Native Hawaiian health care systems. … Initially, you could count the number of researchers on one hand. Now there are nearly 150 researchers [working with us].” 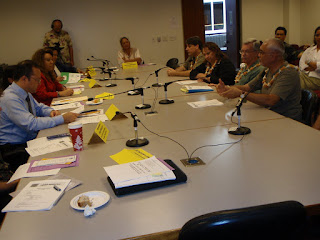 Tom Foye, Planning and Development Director of Papa Ola Lokahi, described how many non-profit healthcare organizations are at risk during economic times because they are dependent solely on federal funding.

“We’re very much at risk because we have one funding source in Washington: Sen. Daniel Inouye,” Foye said. He explained to the caucus that they should look at funding community healthcare organizations through diversification and solid strategic planning.

“We hope that we can continue this conversation in all forums,” Rep. Mele Carroll said to the healthcare practitioners.

Alex Santiago spoke to the caucus on behalf of the Mental Health Alliance. As part of ongoing budget cuts throughout state departments, the Adult Mental Health Services division announced in November that it will be cutting over $25 million from its FY2009 budget by cutting services.

“We are not going to stand by and watch as we try to balance the budget on the backs of the poor,” Santiago said. “What we are going to try to do is bring the word to you [the Legislative Hawaiian Caucus].”

Rep. Pono Chong said that lawmakers need to hear from the community where cuts would be better made. “The state, unlike the federal government, cannot borrow money to operate,” he said.

Rep. Mele Carroll asked Santiago if finding new ways to generate money has been part of the discussion within the mental health community.

Santiago said that all options are being discussed. “Whatever it is we do to get revenue, we have to make sure the money is going to the things we care about,” he said. “There’s a willingness of everyone to come to the table to find a solution.”
Posted by Thelma at 4:06 PM