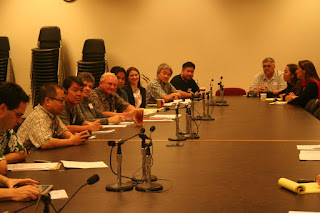 Lawmakers, journalists and *GASP* bloggers sharing a chuckle here and a chortle there. That's what happened today at the House's Meet the Media Workshop for the members of the 2009 Legislature after Georgette Deemer, House communications director and blogger, quipped about following Al Gore on Twitter while commenting on the wavering boundaries between social media and news. I'm not saying the casual gathering of politicians and watchdogs was a dance of lilies and butterflies on a warm summer day; that would be far from the truth. But it did prove to be an excellent opportunity for each of the three groups, who have at times factious relationships, to understand the jobs and concerns of the other. And that, my friend, is what counts.

Discussion topics ranged from cynicism of media by lawmakers who feel that they are often misrepresented in the news to the insistence by reporters/bloggers that the media isn't out to get anyone and only seeks the truth.

And, of course, what would a powwow with bloggers be without a recommendation to lawmakers from Tweeterers to join social media networks or start a blog? The discussion was a good one and opened some doors for better communication between everyone, even, as one reporter put it to a lawmaker, "we're not your friends."
Posted by Thelma at 6:26 PM