On Wednesday, September 2, I was privileged to be briefed by Maj. General Robert Caslen, Jr. who will be leading the 25th Infantry Division when they leave Wahiawa to deploy to Iraq in October. The story of our briefing was covered by The Honolulu Advertiser this morning. 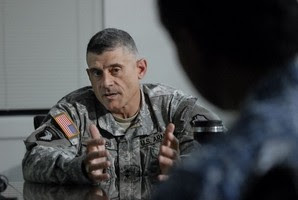 I was struck by his candor, professionalism, and the heartfelt confidence he has in his officers and soldiers. It is impressive to consider that our 25th Infantry soldiers will be responsible for a region the size of Pennsylvania. 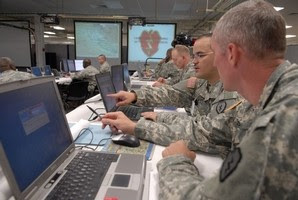 I was inspired to learn what tremendous skill sets each modern-day warrior brings to the battlefield. The Division Operations Center exercise was like a bustling Fortune 500 company dressed in camouflage uniforms and boots - simultaneous team meetings, computer screens aglow, telephones in use, and people on the move.

I learned that besides using "guns and bullets" to destroy and defeat the enemy, our 21st Century Army also brings "pipes and pencils" to rebuild Iraq, its economy, and to restore its people. I learned that the military and security mission is still foremost, but also that the economic recovery and political stabilization is essential and key to long-term, irreversible security.
The briefing on the upcoming deployment of the 25th Infantry Division Mission underscores the important role Hawaii plays in insuring that our soldiers receive the necessary training to accomplish their dangerous and difficult missions. The brave men and women of the 25th Infantry Division - Tropic Lightning are professionals in what they do and they deserve our support both on and off the battlefield.
I extend my appreciation to Maj. General Robert Caslen, Jr. for the personal and insightful briefing of the Division's upcoming mission to Iraq. As always, my support for the soldiers and their families is ever at hand.
Posted by James Gonser at 10:59 AM