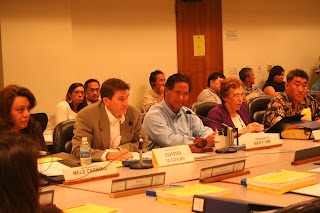 The Council of State Governments-WEST (CSG-WEST) recently elected Representative Marcus Oshiro as Vice-Chair for the coming year. His term will begin on November 20, 2008.

CSG-WEST is a nonprofit organization of state legislators of both parties from Alaska, Arizona, California, Colorado, Hawaii, Idaho, Montana, Nevada, New Mexico, Oregon, Utah, Washington and Wyoming. The organization promotes excellence in state legislatures through regional cooperation, collaboration and professional development. CSG-WEST holds forums on key Western issues and works with other Western political organizations on behalf of the region.

The current chair of CSG-WEST is Alaska State Senator Lesil McGuire. In a statement, Senator McGuire said, “Representative Oshiro is the kind of elected official that I am proud to serve beside. His style is the very essence of servant leadership."

Rep. Oshiro’s election places him in line to chair the regional state legislative group in 2011 and makes him one of four top officers who set policies for the organization.

According to CSG WEST, Rep. Oshiro distinguished himself in recent years by chairing the CSG-WEST Committee on the Future of Western Legislatures, holding major forums on such topics as multi-media outreach, political engagement and redistricting. In 1998, Oshiro was selected as a Toll Fellow by the national CSG. Toll Fellows represent “the best and brightest” state officials in the nation.